Back in September 2000, three local men started a legacy. Malcolm Hodgson, Dr Tim Hughes and Martin Lush were runners themselves and got together to put on a local race to raise funds for the PTA groups of Kirkbymoorside and Gillamoor schools where their children all attended.

Due to the foot and mouth outbreak, there was no race in 2001 but in 2002 it came back in its now annual spot on the Sunday prior to May Day weekend. Over the years this event has developed and grown into a firm favourite on the racing calendar with both club runners and amateurs alike and is the biggest annual event in our small market town.

After 10 years at the helm, the three organisers stepped aside to allow new blood to run the event and in stepped Rick and Catherine Eve. The Eve’s continued to grow the event by introducing the teen 4k race to fill the gap between the children’s 1 mile age group and the adult 10k.

Inevitably the event grew such that it became a more formal affair with a proper course accuracy certificate, UKA licensing, professional medics, chip timing and traffic management. All this leads to added cost in staging a road race. But, at the heart was still a great community event supported by the whole town.

In 2015 Rick and Catherine announced they were standing down from the event and a new organising committee was formed to run it. Many of the committee members had already been involved in the event for many years and are drawn from teaching staff at the schools, PTA members and people in the community. 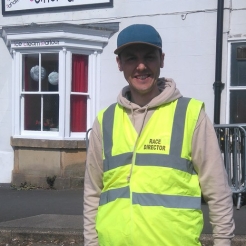 Dave Pearson joined the committee as he was volunteered by his wife. Missing a meeting meant he was allocated the role race director – something he has taken very seriously. As a keen runner himself he did want to run the event after moving to the town in 2014 with his family, however, he now realises this won’t happen until he hangs up his hi-vis vest!

With the Tour de Yorkshire beginning in 2015 it was only a matter of time before it crossed paths with the 10k and it happened in the new committees first full year of 2016. Rather than working against it, the whole town embraced the occasion and although numbers were down in the 10K the day was a huge success.

Dave recognised that the event was not well publicised and began to use social media (Facebook, Twitter and Instagram) to spread the word and build an audience. He attributes the success of these campaigns with the fact that 2017 was a sell-out year. In fact, it sold out multiple times because as people withdrew from the race those places were filled from a waiting list. This success continued with the 2018 race selling out two weeks before the race day.

“I didn’t do the run but my son ran in the 1 mile race, I felt it was a great day for the town and local areas. Social Media was excellent this year and certainly kept everyone updated leading up to the event.”
(reponse from feedback survey 2017)

Keeping the event thriving is vital to raising funds for our local school PTA groups which is why, since the new committee took over, they collected feedback after the race to enable them to improve the event in coming years. Improving the event, spreading the word and drawing in new runners is key to it’s continued success.

In 2018 the event was boosted by Marshal Advanced Composites, a big employer in the town, donating the money to pay for race t-shirts for all the runners in the 10k. So from 2018, those taking part receive not only the traditional commemorative mug but a technical race t-shirt too.

As the 2020 event approached the world looked on as we entered a global pandemic that saw events cancelled up and down the country. What would have been the 20th running of the Kirkbymoorside 10K would have to wait. But it is still waiting as Covid stopped us from running the event in 2021 and the knock-on effects of this meant that 2022 could not take place either.